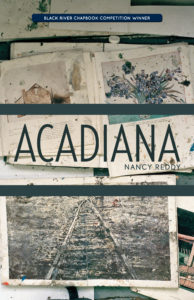 Inspired in part by the landscape and folklore of south Louisiana, Acadiana is set in a small southern town and its surrounding swamps and bayous against the approach and aftermath of a hurricane.

My life in the south was bookended by hurricanes: First, Hurricane Katrina, which devastated the school and community where I’d been teaching in New Orleans East. Then, in Houston years later, Hurricane Ike disrupted the lives of many of my students and damaged the school where I was then teaching, the Southeast campus of YES Prep, an open enrollment charter school aimed at increasing the number of students from underserved communities who attend and graduate from college. That experience of being so near disaster and seeing how communities come together afterwards shaped this collection.

You can read a sampling of poems from Acadiana online: Girl Chooses Flight and Signs Resembling Sacraments, selected for Hoppenthaler’s Congeries in Connotation Press; The Sibyls Swear Away Their Prophecy, The Thibodeaux Girl Speaks, After, and St. James at the Ascension Parish Drive-In, all published by Radar Poetry as finalists for their 2016 Coniston Prize. A selection of poems was featured in The Wardrobe’s Best Dressed. Acadiana was reviewed in Eco Theo and Run & Tell That Reviews. You can also read my interviews about the collection in The Chapbook Interview, Carpe Noctem, Cloudy House, and Speaking of Marvels.

You can order Acadiana from Black Lawrence Press, Small Press Distribution, or other online retailers.